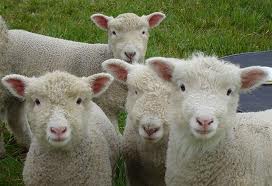 Cecil was in love. He had harboured this secret passion for months now, and finally his secret was to be told. After long and careful consideration of all the girls he could have, he realized that there was really only place in his heart, and that was for Elizabeth.

‘Oh! Elizabeth,‘ he sighed to himself, ‘I love you more than life itself.’

He stood gazing at the flock before him with an air of ownership. ‘All mine,’ he said with a certain amount of pride. ‘All mine, to love, to have and to hold, until the meat works us do part. And, I am the only man around here,’ he thought, ‘they are mine, like it or not!’

Cecil laughed to himself at his wonderful life.

‘However, I know my duty,’ he told himself solemnly. ‘Whether they are beautiful or ugly, young or old, I must make love to them all within the next few weeks. It is a duty I will not shirk!’ he told himself with determination. It was stamina sapping stuff, but he would see it through to the bitter end!

He consulted his little black book. Yesterday had been busy and today was just as full. He went over the appointments for the day. ‘First is Maryanne, 2 years old, and just plain frumpy really, never takes good care of herself,‘ he mumbled. ‘Then Sandra, a stupid giggly one year old, always skipping around, no brains that girl. There is Alice, another one year old, but depressed, possibly bi-polar. Also Harriet, nearly three years old, arthritic and refused to move in the mornings till she had her twining’s. Then Marcella. Marcella! What a stupid name for a sheep, mind you her mother’s name was Alexandrina, high and mighty, thought she was the bees knees that one!’

He thought back to Alexandrina. She was very aloof, very standoffish, very long legs, made his job very difficult really.

‘Not all sheep are the same you know,’ he addressed Marty, a praying mantis on the fence. ‘No sir, not at all. Some are haughty, some are vain, some plain, slovenly, or just ordinary. And one! Well! Elizabeth,’ . . . he said breathlessly, ‘she is just a delight to the eye!’

He moved closer to the praying mantis and with a conspiratorial tone said, ‘Let me inform you of some of the finer points of these girls.’ Marty the mantis yawned, but kept listening. He was bored, but had nothing better to do just now. ‘Look at their feet,‘ said Cecil. ‘Some are dainty, some with long toe nails, painted even, short toe nails, some big, some small, all different! And their legs, well some are long, and that makes my life a little tiresome,’ he said with a sigh.

Cecil although regarding himself as a stud extraordinaire, had been born with shortish legs, and that made it tricky trying to look entirely professional when he was left swinging around in thin air behind some girl with gangly legs. ‘But,‘ he continued, ‘others have thin legs, fat legs, and look at Harriet’s knobbly knees, and then! Well just take a peek at Glenda’s fish net stockings! Trying not to get the family jewels tangled up there is a work of art, I can tell you!’

Marty mantis raised his eyebrows slightly. ‘It would be worth waiting around for a day to see this guy at work,’ he said to himself with a grin.

‘Now, look at the faces.’ continued Cecil. ‘Ugly, plain, long noses, squished up noses, some with cataracts stumbling around and falling over the rocks! And as for their mouths! Well! Some have breath like compost heaps or ensilage. But Elizabeth, oh my lovely Elizabeth, has the breath of newly mown hay.’

‘Are you for real?’ Marty said to him, only Cecil didn’t understand Mantis so didn’t answer. ‘They are all just balls of wool on sticks!’

Cecil changed his stance and said in a more confident tone, ‘and let me tell you about Elizabeth. Even her name is royalty itself. She is so clever, has a Master of Arts in music, specializing in violin and harp composition. She can beat me at cribbage too!

Her legs are just the right shape and length, and she only wears the finest nylons. She has the daintiest feet and doesn’t wear flashy nail polish, just clear stuff. And she has the most wonderful personality, serious when necessary but with a wonderful sense of humour.’

He laughed out loud. ‘You must ask her to tell you the one about Sharry Lewis and Lamb Chop! And to top it off, she is just absolutely beautiful, not a fibre out of place.’

Cecil looked at the mantis. ‘Well mate, duty calls. I better get on. Need some breakfast to get my energy up. My heart is racing with anticipation! It’s going to be a fabulous day.’

He slowly walked over to the water trough, looked at his reflection with satisfaction and said to himself, ‘Yes, I am definitely a discerning sheep!’

Marty settled down on the post for a day of free entertainment.

10. What other musical instruments do you know of?