Never had he heard such silence.  Never before had he been in such a wide open place, where the cold wind could wander at will, to go around or through you depending on its whim.  Never had he seen such a vast almost uninhabited land, with few people, no high rises, no buses, cars or motorbikes with horns a-honking.

He stood in awe, neck straining back, eyes reflecting the millions of stars in the sky.  Never had he seen such a clear sky.  He gazed at the edge of our galaxy displaying its splendor as it silently flowed from north to south, its white opaline dust almost within reach. This was the first time in his twenty eight years of life he had seen the Milky Way.

Never had he felt so small, so insignificant, such a little speck on this great big ball we call our home.  Never before had he felt such oneness with the earth, with the endless sky, and the emptiness of it all. 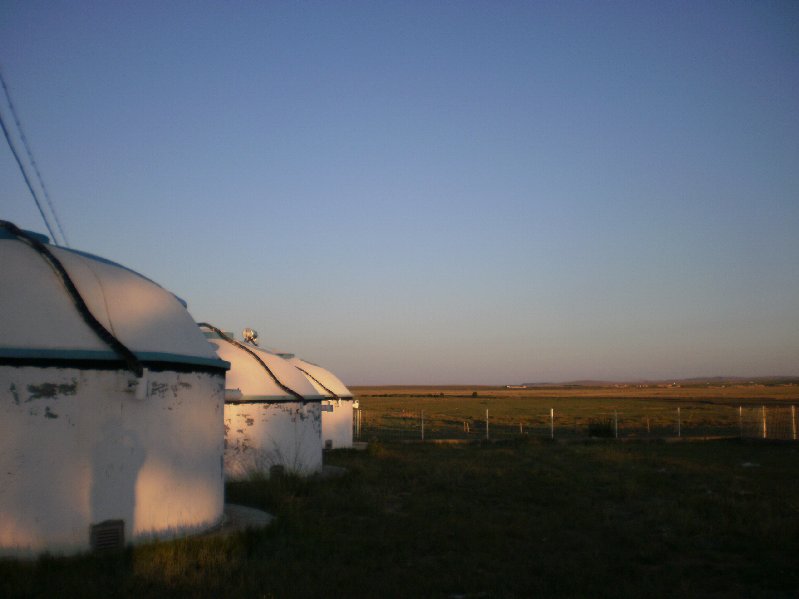 Dawn on the grasslands.

For a young Chinese man, used to living in what are called ‘small’ cities of perhaps two or three million people, these vast grasslands were a wonderland of space.  The tall grass heads moved with a breeze unimpeded by endless blocks of tall apartments.  The air was clean. There was no smog, no fumes from hundreds of smelly old buses going by.  The water running beside the roadside was clear and pure, and out in the vast emptiness there was no light pollution to veil the stars from his gaze.

A Yurt, the round homes on the grasslands of Inner Mongolia.

He stood there in the late evening, outside the little Yurt he would soon sleep in.  He stood thus for a long long time, quiet, absorbing the silence, opening his face to the wind, and listening to the silence of a broad land at peace. He watched as the moon slowly rose over the trees, and listened to the faint night sounds of the grasslands of Inner Mongolia. He also was at peace.

1. What is this story about?

2. Where is this story talking about?

3. Can you find Inner Mongolia on the map?

5. Describe the picture, what can you see?

6. How are the grasslands different from your hometown?

7. What are some of the things he can see?

8. What are some of the things he can hear?

9. Have you ever been somewhere at night where you could see a very clear sky and all the stars?

2 Responses to The silent grasslands.