The day before the wedding.

The house has been a hive of activity. People from all over the place have turned up, and there are women (relatives of some sort)  all sitting round, making rice balls and dumplings, chatting at the top of their  voices, helping to prepare the banquet for tonight. I guess it’s not much different from a big family party at home. The difference is, it is all the old people, and no one young really.

Tonight there is going to be a blessing on the house, so I am going up to sleep at the aunties house in a different apartment on a different floor. I am keeping out of those sorts of things. They are supposed to come at 3am and it is supposed to last for 2 hours. Not for me.

In the afternoon we transported my air bed and bedding upstairs and I got myself sorted. The dinner started at about 6.30, so we went down to this large tent area that had been set up outside the front door, on the street. It seems acceptable to just use the street for big affairs if that’s what you want o do. I see the tent has moved up and over the street this morning.

There were about 100 present, and I was very interested in the attendees. I was asking Alex lots of questions, because this is all new to me. He said most of them were his father’s relatives. Most of them were older. There were a few teens and children, but Alex didn’t know who they were. He said he would know about ten people of the 100 or so that were there. (He was paying for this).

The food was good, with lots of different dishes. I didn’t have too much of anything, not knowing how much was still to come, so at the end, I hadn’t eaten that much. There were some people sitting at a table a little distance away, and then someone sent them over to sit at our table. I guess I could mention, that in the seating hierarchy I did okay last night, sitting on Alex’s right, which is the place of honour apparently.

The man that came to sit next to Alex on the left was a man I had seen before. I knew I knew him as soon as I saw him. Alex did not know him and did not believe me, and still thinks I am making a mistake, and maybe I am, it seems a huge coincidence to sit by someone I met somewhere in China at some time, a one in 1.4 billion chance. But, I really do think I had met him and I think he recognised me. He was a weasel of a man. I recognised his voice and his way of speaking. He claimed to speak no English, but he could, and I think his English was quite good, because the few things he said were in complete sentences and the speaking was all correct. He had a huge meal, and as soon as new dishes came to the table his chopsticks were the first in there for the choicest pieces.

After the meal was finished I went up to Alex’s flat, and a bunch of people came up, including the others at our table that he didn’t, know, including this weasel man. I texted Alex to come straight up, which he did. This man, and the others, that Alex had never met before came and poked all around the house, and I watched the weasel man very closely, following him all around. He had the gall to offer me some tea, he obviously did not know who I was or who Alex was, and he offered it in excellent English.  Haha, the trouble was he offered from a set used only by Alex’s father.

This man stood for a long time in front of some photos of Alex’s grandparents and his mother. He was there for ages, just looking. I was watching him like a hawk, and actually tried to take a video of him but it didn’t come out for some reason.

After Alex came up the weasel man left. Alex had had the forethought of locking all the bedrooms before he went down to the meal so all that stuff was safe enough.

After he had gone, Alex stood also looking at the photos and then realised what the man had seen. On the shelf just under the photos was a small pile of money cards, ones that can be used at a supermarket or shop, a bit like ATM card that you can buy in advance and just use in the supermarket. Alex thinks he was eyeing these up in the hope of snaffling them. As it happened the cards had all been used up anyway there was no money left on them, but as far as I could see he didn’t take anything.

I will be interested to see if the weasel man rolls up at the wedding tonight.

The people came to bless the house apparently at 2 am, and stayed for about an hour and a half. I slept right through it. This morning the old ladies are back fussing over all the leftovers and sorting out the food. 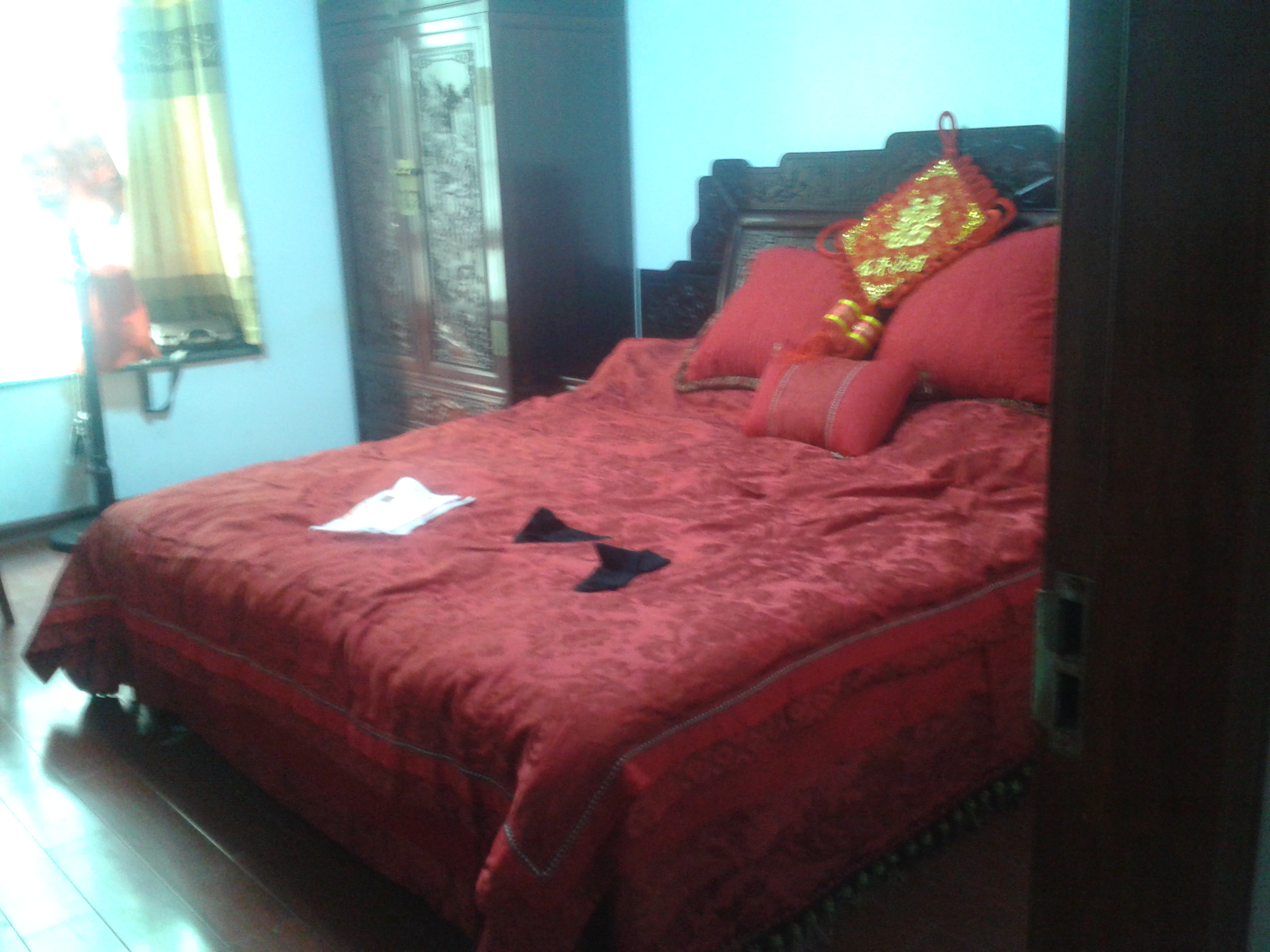 They are setting up the marriage bed, complete with a whole set of red bedding and pillows and cushions. A bit late really considering she is now  6 months pregnant.