There is a road code, but I don’t know what they call it.  There have been some times when I have asked locals what the rules are for certain situations. The answer has been, it is too hard to expect everyone to read the book of rules and obey them. So although there is a rule book, no one knows it and no one follows any   of the rules.  Here are the rules as I see them.

You must obey the traffic lights. Except if you are a pedestrian and can get away with crossing on a red light, or if you are a motor bike, bicycle or electric bike. Also, cars should go through orange lights, and probably the first ten seconds or so of red lights. This website suggests about 17,000 pedestrians get killed each year. grapevine.net.au/~mccluskeyarundell/Ped_casualty.pdf

There are clearly marked crossings but they don’t mean a thing. Probably if you were knocked over on a crossing the penalty might be higher than if you got knocked down on the unmarked road. 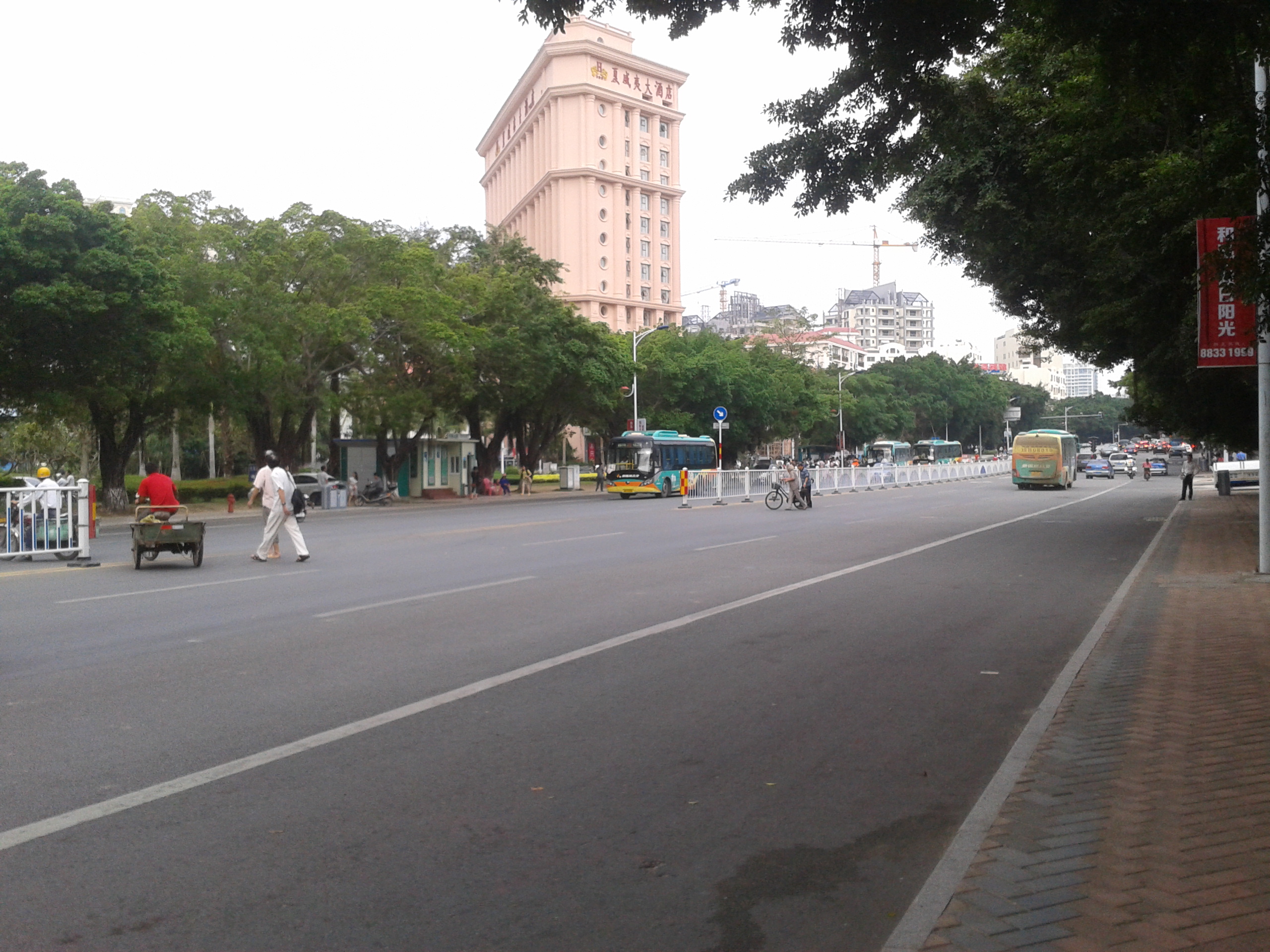 Double white ‘do not cross’ lines.

If you have an accident.  No matter where you are, or how many lanes of traffic you are blocking, if you have an accident even a tiny little ding, you never move your car until the traffic police have come and worked out who was in the wrong. There are the exceptions, it seems that if you can sort it out on the side of the road, work out who has to pay for what etc, you can do that.

The rider must wear a helmet. Pillion passengers, children or other family members seem to be exempt. It is quite okay to have the whole family on the scooter. 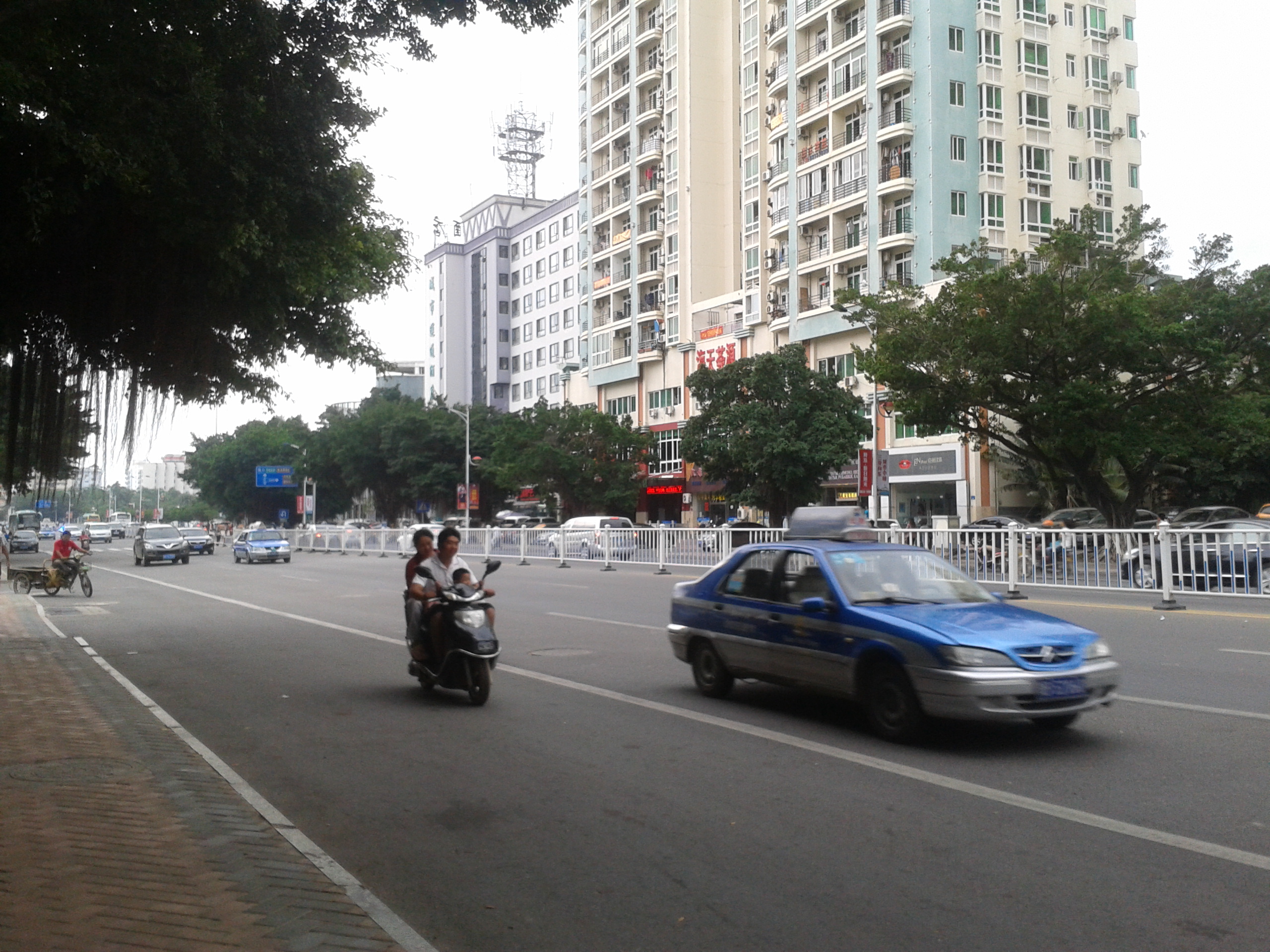 Mother father and baby on scooter is fine.

As for motor cycles except they have no motor noise and they creep up on you unawares. Then they honk their horn to tell you to get off the footpath because they want to use it. 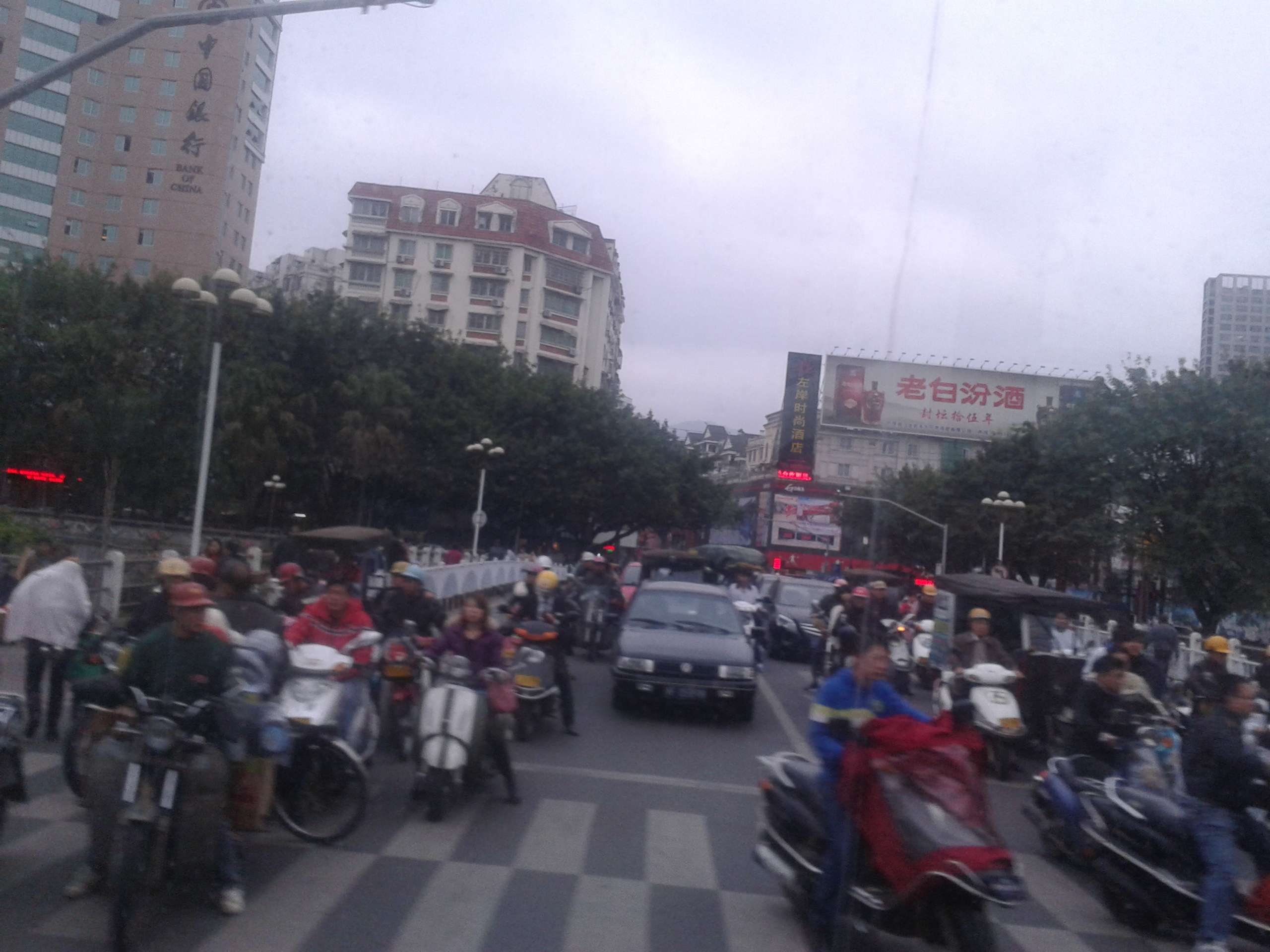 A few motor cycles and electric motor bikes in Longyan.

Footpaths.  You should use the footpath. But when many roads were built, it was for a few cars and no parking was allowed for. So the nice wide footpaths became the parking lots. Hence it is necessary for pedestrians to walk on the roads more often than not.

Horns are for honking, any time anywhere, any place. Restraint is unnecessary.

This can be done anywhere anytime, but it must be done slowly so that everyone can stop for you. 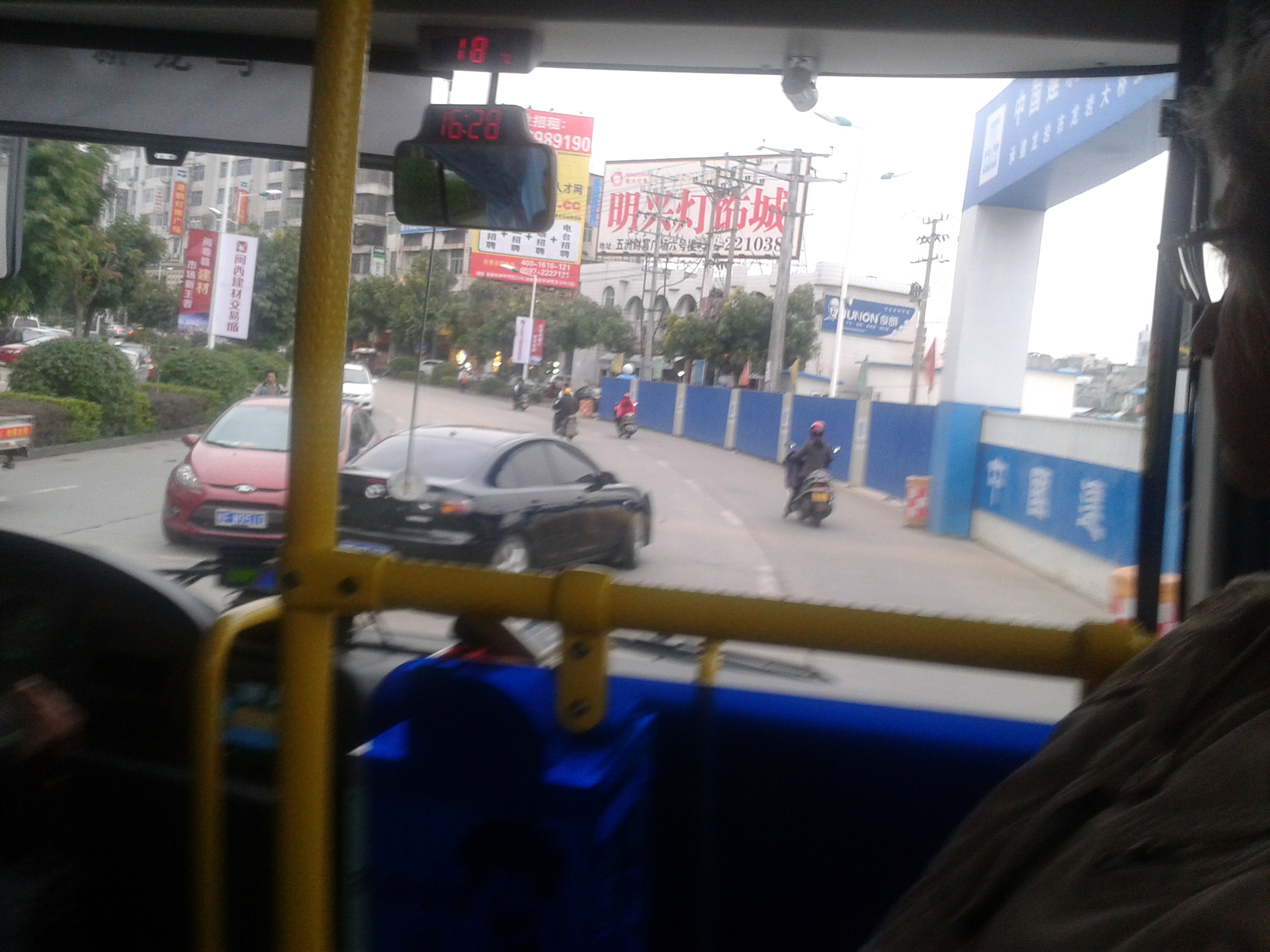 The black car has just pulled across in front of the red car and our bus. They all stopped, the black car slowly slid across all busy lanes and everyone honked their horns.

Crossroad intersections with no lights.

It’s just a major free for all. As my informatant mentioned earlier said, no one knows the rules so no one obeys them. He is a driver, but has no idea what the road rule is for intersections.

You need to be aware of what is in front of you. You need to honk at what is in front of you so it knows you are either behind it or coming up beside you. You don’t need to know what is behind you, the people behind you will keep their eyes on what is level with them. When entering from a side road, you just go like the clappers and somehow the others on the main thoroughfare will make room for you.

Keeping pace with the other traffic around you.

Patience is a virtue,

Possess it if you can,

Sometimes had by Aussies,

If you can weave in and out like a formula 1 driver and make ten milliseconds on the trip, then you should do so. Going with the flow is not an option.

On the whole it is a system of semi-organised chaos. It’s a wonder the whole nation doesn’t wipe itself out on the roads. The one saving grace is that most of them are so unsure of what they are supposed to do, that they do it quite slowly, so the accidents often are not high speed killers like we have on our wide long open road in Australia.

Oh and how to they keep their streets clean? By women sweeping them day and night, in the towns and in the country. This woman is covered in several layers of top to toe clothing, plus hat, scarf wrapped right around her face and nose, so only her eyes are visible, white cotton gloves and a sort of uniform over her normal clothes. How she doesn’t die from the heat I’ll never know. 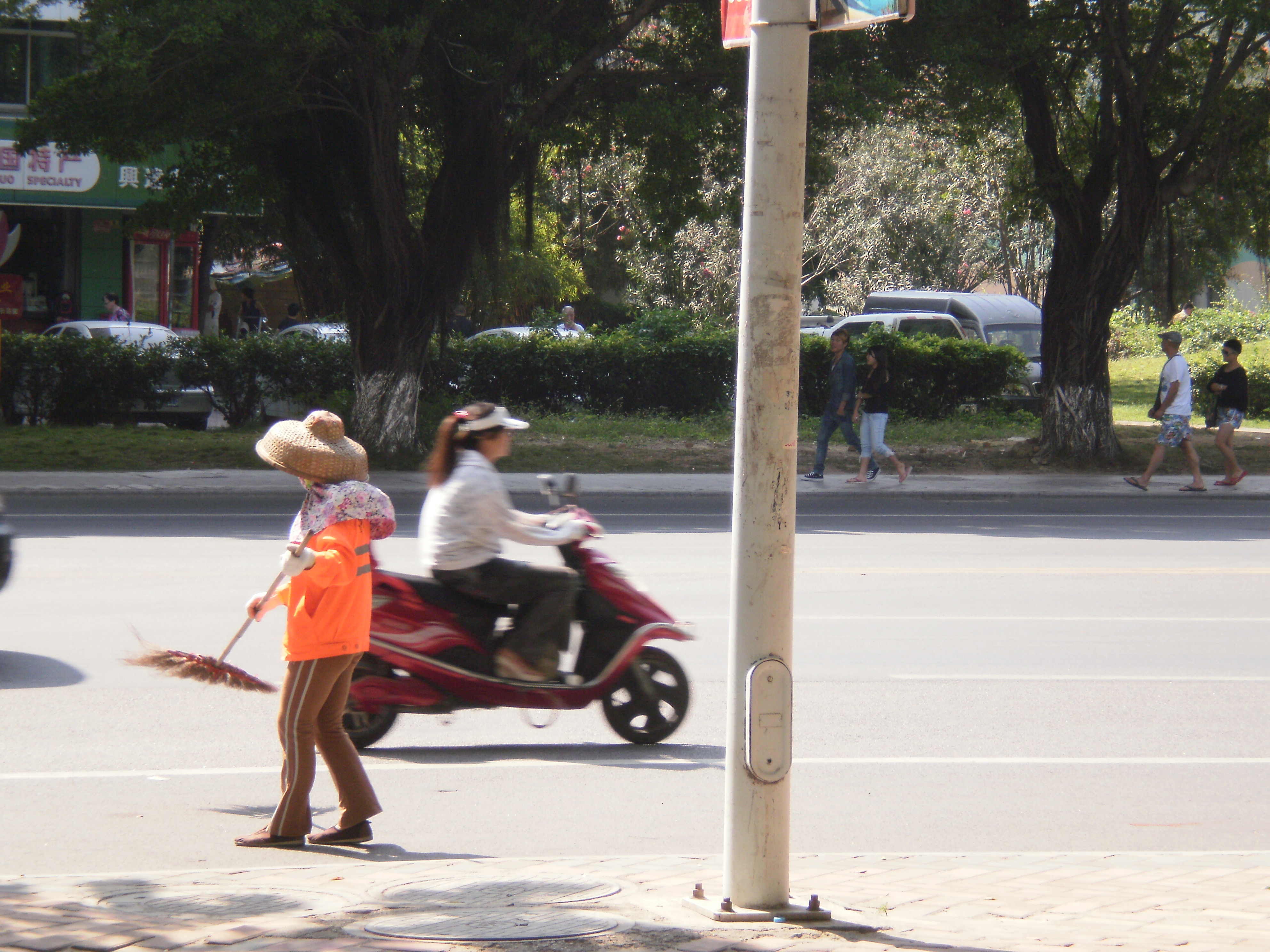 Woman sweeping the street. All covered up with many layers of clothes, even in the heat.