It is freezing cold up north, around Beijing it will be -15 degrees, and some places well inland are having -40 degrees. That’s a lot of cold weather. I see on the news that England and USA are also having some real cold snaps, so we are not alone.  Anyway, China is always a cold place in the winter. It’s overcast, with a bit of a wind blowing. Below is Alex’s father standing in front of a partly open window. It’s cold today so don’t need it too wide.

I have been at home this morning. It is just 1 pm, so is the warmest part of the day. It is 10 degrees in here with some of the windows open, we need a bit of fresh air. They do not use heating, I guess they might in extreme situations but generally not.  I have been watching an American rodeo program, an American boxing program and some American basketball, all with Chinese speaking over the top of the normal speaking.  It’s better than the constant news in Chinese that I can’t understand.

We have just finished lunch of hot tasty white carrot soup, with some pork bones in it, (which I like) nice cabbage, rice of course, and some freshly cooked crabs, rather small, but okay to eat. Along with that were several dishes left over from yesterday and the day before which I did not partake of.

I only own two pairs of fleecy pants, and I am wearing one of them with a pair of long tights underneath. On top I have a Tshirt, and fine woollen long sleeved jersey and a fleecy sweatshirt. On my feet I have a pair of thick fleecy socks and some scuffy things. I am also wearing a long thick woollen scarf. On my knee has been a hottie, which is enough to warm my thighs and my hands. So the cold has set in, and I am pretty chilly right now. Going to bed is a good option right at the moment, but even then it takes me a while to warm up. 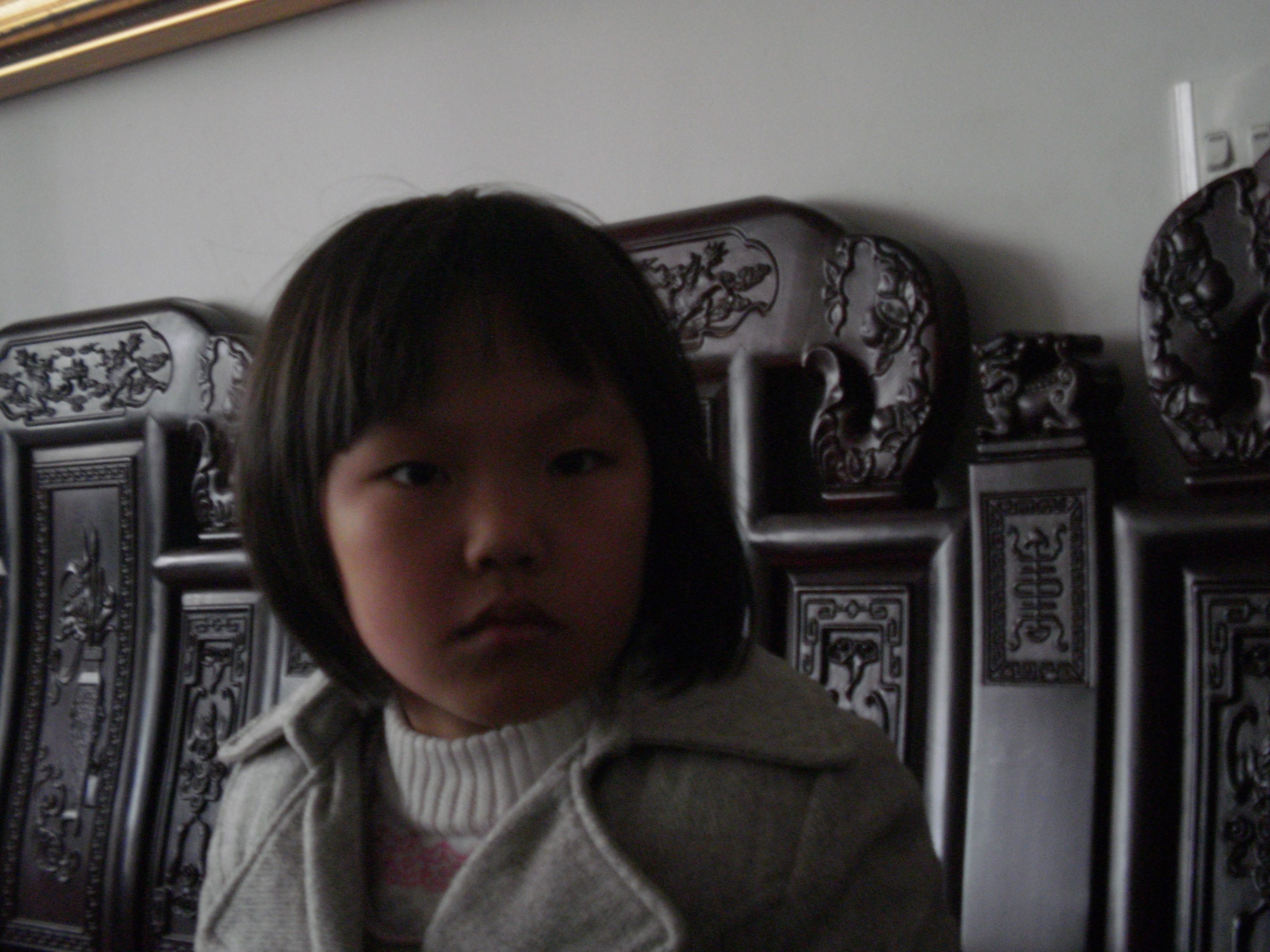 Alex's cousins daughter. According to Mr Google this would be his second cousin. She is five years old and a pretty smart little cookie. 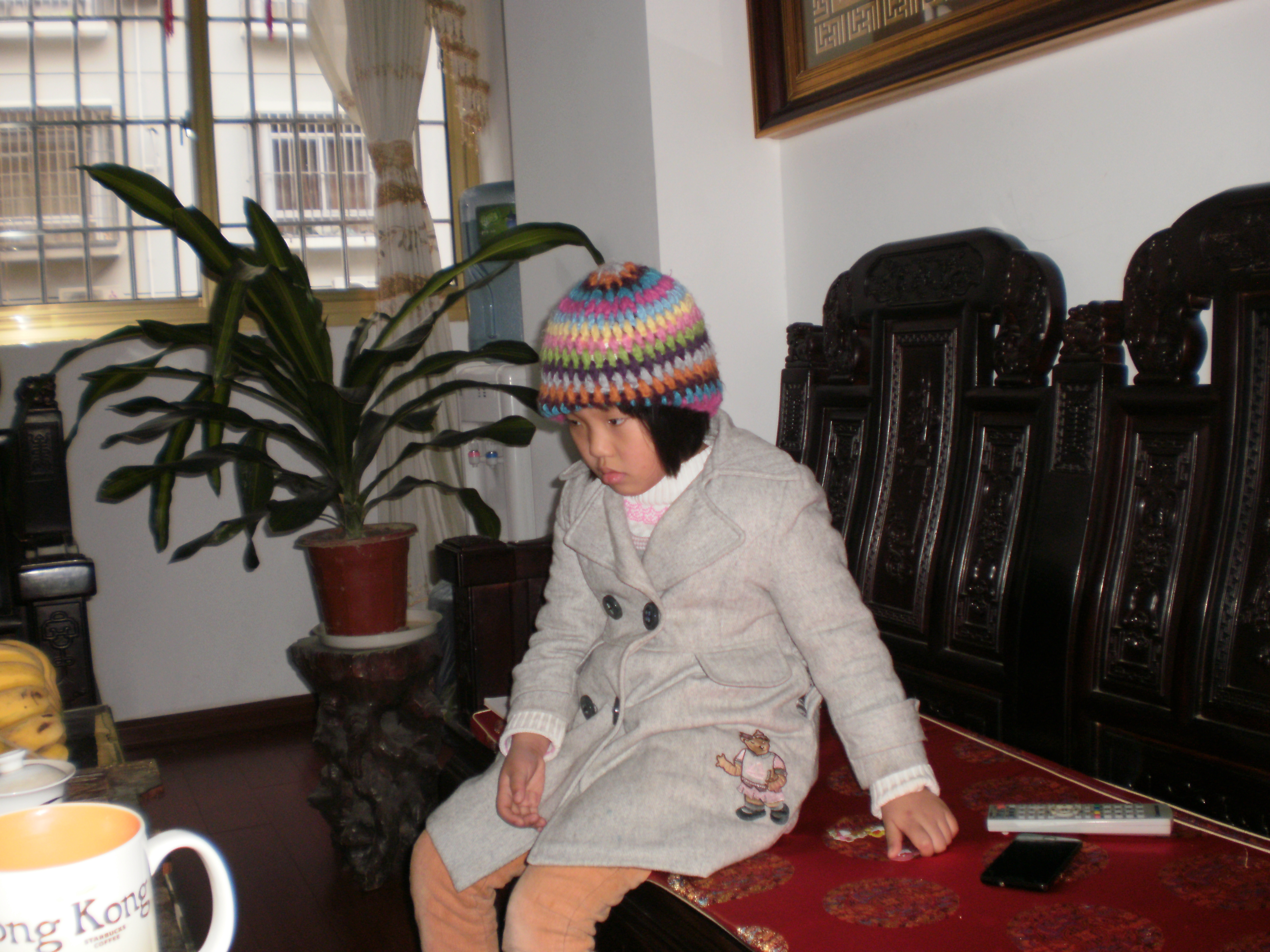 All rugged up for a day like today for indoors.

I have no idea what her name is, or anyone elses names for that matter, it’s all Chinese to me. She is dressed normally for a child for this kind of weather for indoors. She will have woollen long johns, and socks and shoes. On top she will have a longsleeved woollen singlet, and at least another layer under her woollen jumper and then her overcoat on top. the hat finishes it off.  She found some program she likes to watch on the ipad.

Alex’s cousin lives up one flight of stairs with her daughter, shown in the picture. The cousin’s mother also lives with her, and her husband seems to come and go. The little girl is five years old, and actually very smart. Maybe it’s because they get so much one on one time with adults, but she seems to be very clever. She spends quite a lot of time here, and actually it’s nice to see Alex’s interaction with her, he is very good with children.

Over the road the lady is making plenty more spring roll wraps. Next door there are people sorting tea leaves. Next door again there is the snake man, but he doesn’t seem to have any business going at the moment so he and two friends are sitting outside playing cards, and a few yuan are changing hands. Next to him is the drycleaner/alteration man, with no business that I can see but his door is open. He seems to be very particular with his little shop, he is frequently out the front sweeping his little piece of concrete.

Last night someone came to the house to visit. The courtesy rules here are very different. I spoke to Alex this morning and asked him to introduce me to people when they come to the house. I have no idea who they are or where they are from. I reminded him of a time I first visited Putian, a long time ago now, and his cousin took us out for a meal. There were about 20 people present. I was not introduced to any of them, I had no idea who they were or anything about them. I sat , ate, and left. I explained to Alex that we would consider it extremely rude to sit at a table and not know who you were sitting with and that we would introduce everyone to everyone. He laughed, and apologised. I found out the visitor last night was an uncle.

Lots of relatives are coming from Longyan for the wedding which is now 7 days away. They will stay for a couple of days at a hotel close by. But I can see it is going to be a busy noisy few days. On the 31st I will go down to Xiamen for a couple of days and stay with Jenny and Jerry. Ah, a little sanity may prevail. Then it’s off to Suzhou for a few more days of sanity with friends.

Alex has been waiting all day to go out. I don’t know who he was waiting for, but they have gone to the hotel to arrange the menu for the wedding. You can bet your boots it will be a banquet to end all banquets. They rarely have rice or noodles but all the specialities. I will fill you in after the event.